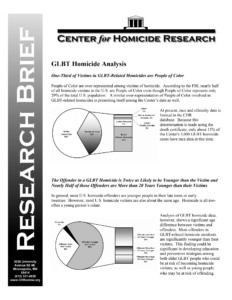 The Center for Homicide Research conducted an in-depth statistical analysis of its GLBT Homicide Database in 2006. This study combines data analysis from CHR itself and from the FBI’s database. When looking at the demographic makeup of gay homicides, several key findings stick out. The CHR found that from gay homicides, people of color are disproportionately represented among the victims, with 1/3 of the victims being people of color. Additionally, the offender in a GLBT Homicide is twice as likely to be younger than the victim and nearly half of those offenders are more than 20 years younger than their victims. Finally, the rates of female victims in GLBT homicides have risen from 5% in 1994 to 13%.

* An important note: at the time of publication (2006), the acronym “GLBT” was used to described homosexual, transgender, and gender non-conforming individuals. Since then, the more widely known and accepted acronym for the group is “LGBTQIA+”.